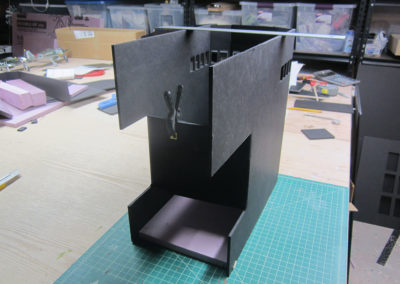 I used pink foam board inside the structure to keep it stable. 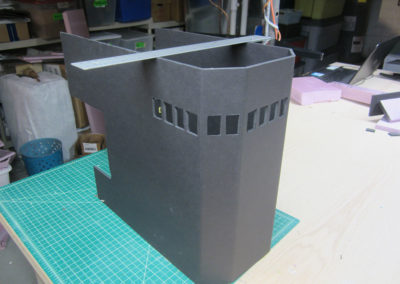 Creating a Japanese aircraft carrier out of foam board

I used a 36″ wide piece of foam board to make the carrier operations island. I calculated the dimensions for each side, building in the 1/8″ channel I would need for each angle of the structure to bend it, then using a T-Square cut out the entire piece prior to assembly. I used the T-square to make sure all dimensions were “true”, 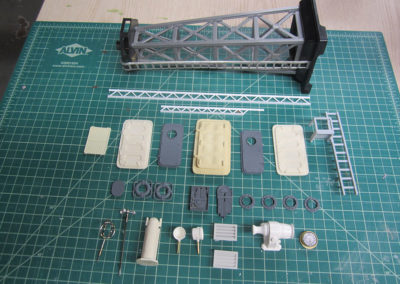 I bought most of the Nautical details from online model boat hobby stores. I made the radio tower from an old Lionel railroad light tower and some plastic sprue. 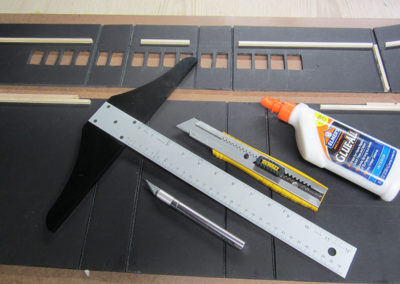 These are the only tools you’ll need to build the Japanese carrier. Make sure your blades are fresh, as dull blades tend to make the cuts much rougher. I use wood strips to strengthen all corners and joins. . 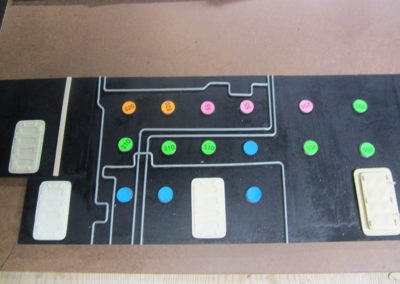 I laid out the entire Island and then added all the detail before assembling. The colored dots were uses to protect the black background behind each porthole. 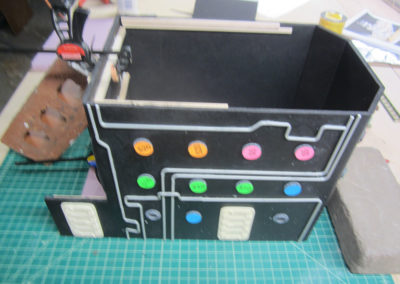 I assembled the Island using Elmer’s white glue, and reinforced each corner with wood strips glued on. 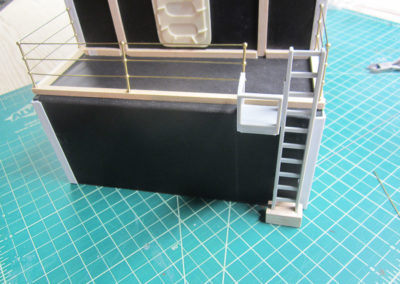 Making a Japanese carrier back deck

I got the railing from an online model boat hobby store, as well as the hatch. The plastic ladder was from a “spare parts box” i keep to hold stuff I may use in the future….you never know what may come in handy….. 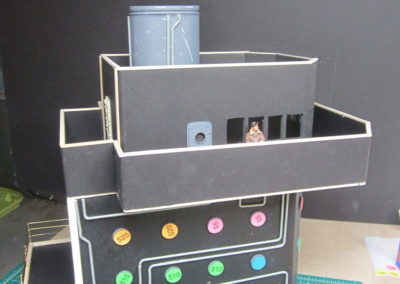 Note the figure for visual scale. I made the smokestack out of a auto wipe can. the hatch doors and portholes I got from a boat hobby store on line,as well as the railings on the back deck. again note the figure on the deck for visual perspective 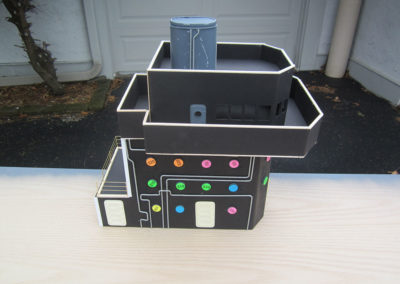 Another view of the pre-painted Japanese carrier 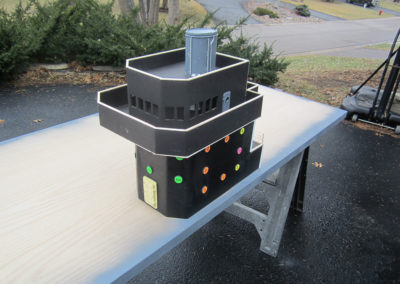 Prior to painting the island, I used sticky dots to cover each porthole to protect the black background behind each one. Note I also used wood strips to add strength to the railings. 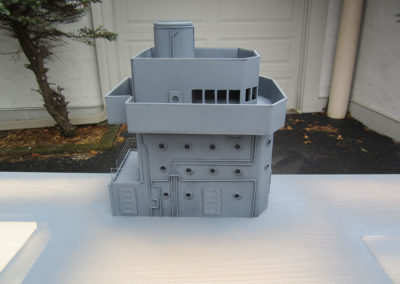 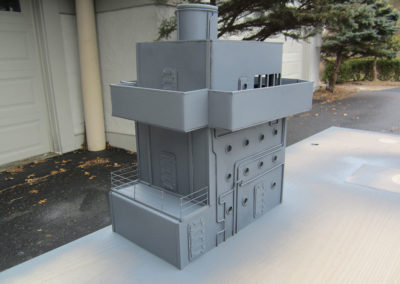 After the Island was completed, I used Gray auto primer to spray paint the structure. Note the tubing on the outside of the structure which was a distinctive part of early Japanese carriers. 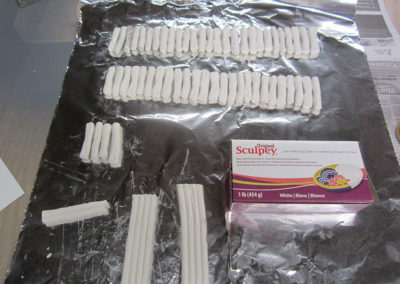 Creating sisal bags out of Sculpey prior to casting. Baking in the oven hastens drying time 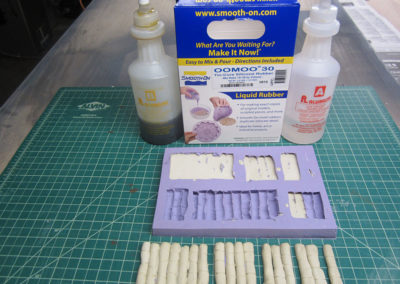 Early Japanese carriers used Sisal bags as rudimental protection on the unarmoured sections of their carriers. I first used Sculpey to make a series of bag sections, then caste them using rubber molding product from Smooth-on. I used plastic to then caste multiple examples to attach to the carrier Island. 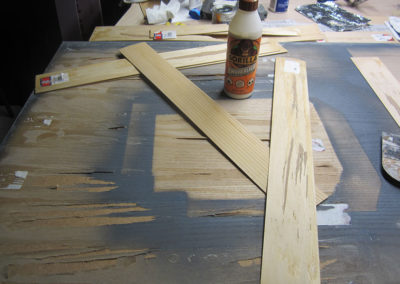 Destruction of a Japanese carrier deck

I used a hollow core door bought at Home Depot as a base for the deck, then covered in wooden planking. Unfortunately, I used too much glue which warped the decking, requiring me to rip it all out and start over. 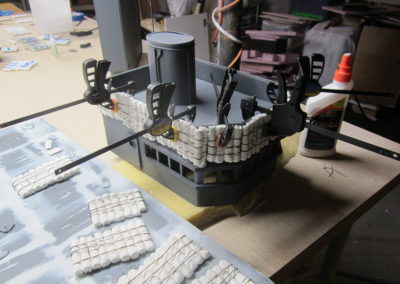 After creating the distinctive Japanese carrier sisal bags, attached them to the tower with Elmer’s white glue 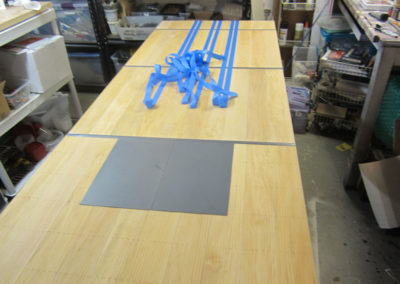 I used painters tape to mark off the carriers deck striping, In this case, had to strip off as found warping on the deck due to too much liquid glue 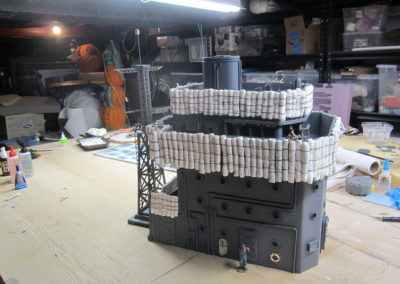 Final look at the carriers operations center and radio mast 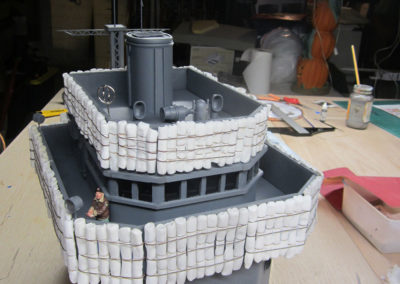 Construction of the carrier operation center

Final phase of construction. Note I always have a figure to use for visual scale to insure a realistic look is achieved 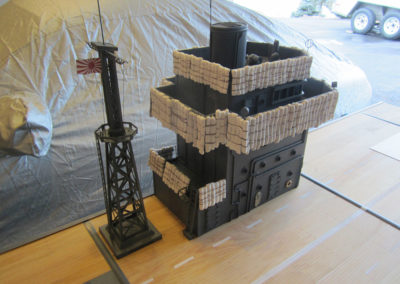 Placing the Japanese operations “Island” on the carrier. 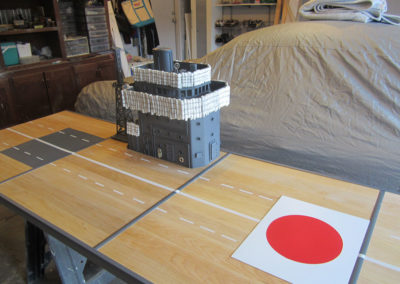 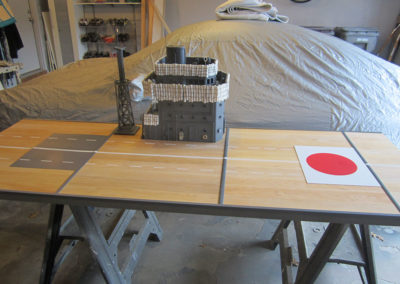 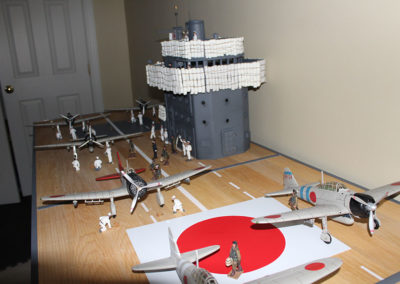 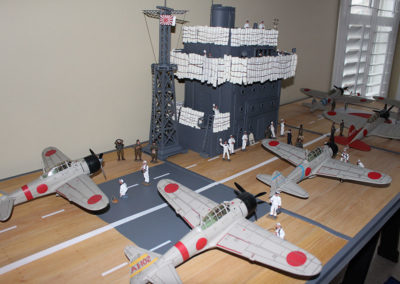 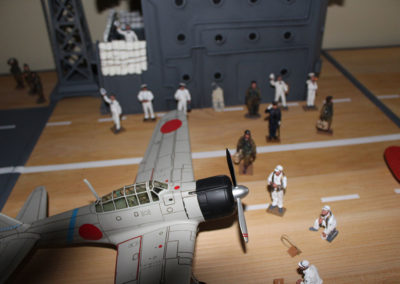 Prepping a Zero for take off 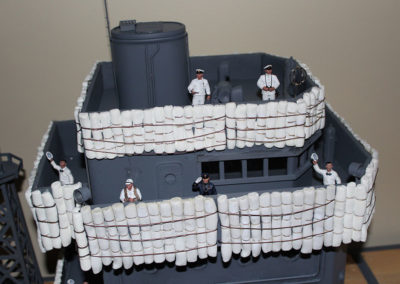 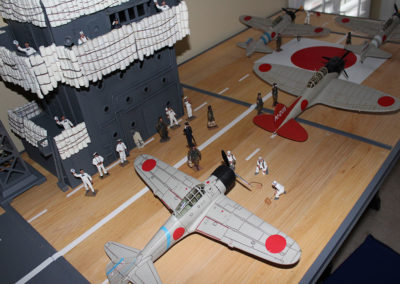 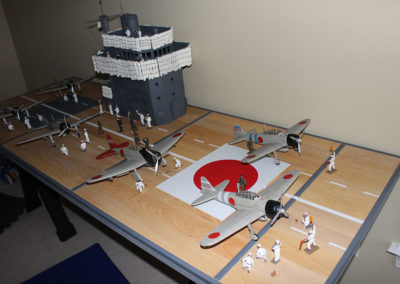 Zeros and Jakes waiting to take off for Pearly harbor